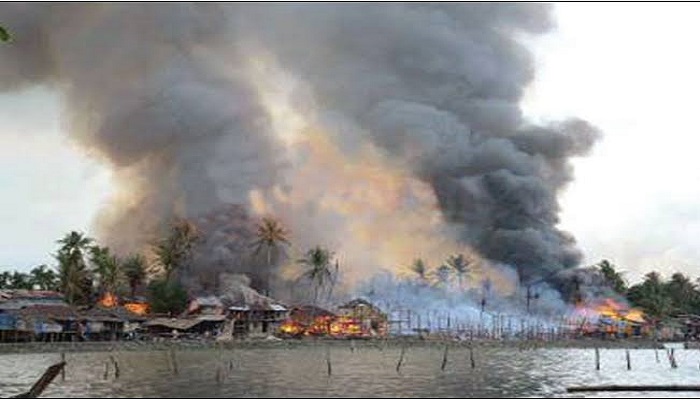 A week after case filed by Gambia lawsuit in the International Trial Court (ICJ) against Myanmar over the Rohingya genocide, the country’s military has again set fire to the Rohingya settlements in Arakan State on Thursday (January 27).

The Myanmar army and the Rakhine terrorist organization, NTL, set fire to the village of Mao Tang, about 15 km from the city of Maungdaw, Arakan on Wednesday evening.

As soon as the fire started at 6 pm, the 12 houses of the Rohingya were burnt down. Until the last news, the fire was burning even on a deep night.

It is to be noted that the Gambia’s case has been ordered by the International Criminal Court (ICJ) in connection with the massacre brought against Myanmar.

The West African country of Gambia filed a lawsuit in Myanmar on November 5, accusing the minority Rohingya Muslims of genocide and crimes against humanity.

In addition, at least 1 million Rohingya refugees took refuge in Bangladesh in the face of the genocide of the Myanmar army in Rakhine State at the end of the 2017.